What Are The Canadian Oil Sands 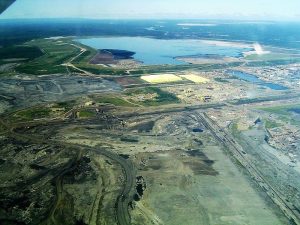 And Their Importance To Canada

Oil sands are a naturally occurring geological phenomenon, made up of a mixture of sand, clay, water, and bitumen.  Oil sands can be found in many places around the world, such as Venezuela, the United States, Russia, and of course, Canada.

The Canadian oil sands are located in northeastern Alberta, Canada.  Officially called the ‘Athabasca Oil Sands’ they are the worlds largest single deposit of crude bitumen containing roughly 1.7 trillion barrels and contribute to Canada’s total oil reserves, being the third largest in the world after Saudi Arabia, and Venezuela.

They were formed millions of years ago as a result of the formation of the Canadian Rocky Mountains.  The Pacific tectonic plate overthrust on the North American tectonic plate, the collision of these two tectonic plates compressed the Albertan plains and raised the Canadian Rockies creating the famous mountain range we know today.  As the Albertan plains were compressed by the Pacific plate, sedimentary rock and organic matter were buried deep underground.  This created high amounts of pressure and heat underground truing the organic matter into the bitumen found in the oil sands today.

Extraction of the bitumen in the oil sands happens via two main processes.  When the bitumen is buried deep within the ground, in-situ extraction is used, which involves using specialized ‘steam-assisted gravity drainage’.  In contrast, when the bitumen is located closer to the surface, open pit mining methods are used.

Due to the large reserves of the oil sands in Alberta, the energy industry is extremely important to the province generating revenues of $111.7 billion in 2014.